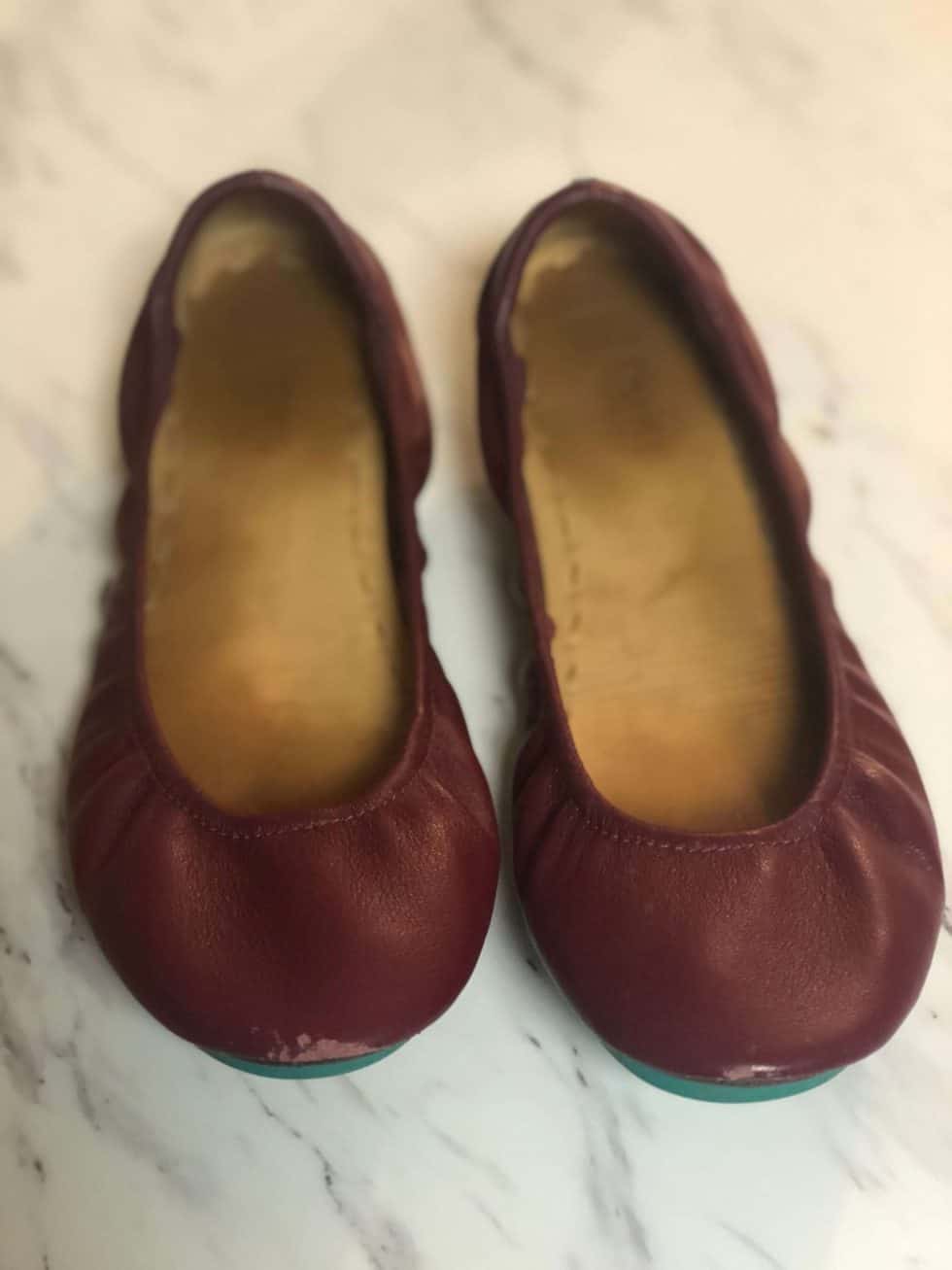 Tieks Review: How I Saved $25 Off my First Pair and Were They Worth It?

So you’re considering making the investment on a really expensive pair of flats, and you’re searching for an honest Tieks review with the hopes that somehow you’ll be able to score a deal and save some money.

$175 for a pair of classic ballet flats is not chump change, after all. Spoiler alert: you can search all day long, but you won’t find a coupon code that actually works. But before you leave, you want to see if Tieks flats are worth the investment, right?

I’m going to share my opinion on whether Tieks

As a frugal person, I research stuff to death before purchasing…especially when splurging on something for myself (which rarely happens).

In fact, I had my eye on a pair of Tieks for four years before I finally pulled the trigger and bought my first pair. 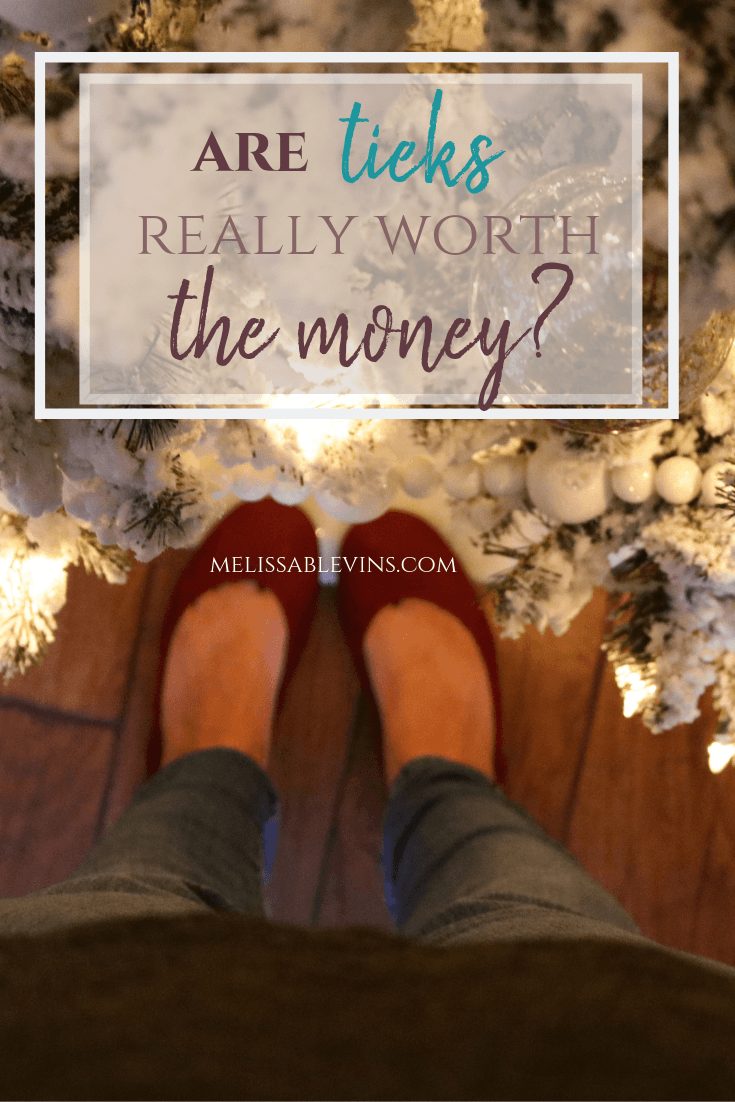 Contents hide
Tieks Flats Coupon Codes
My Tieks Review
A Tieks Shipping Error
A Tieks Customer Service Disaster
What a Mess!
Why are Tieks So Expensive? Are They Worth It?
Tieks Scuff Easily: How to Repair
Save
Tieks Never Go On Sale
Alternatives to Tieks Flats on Amazon
Bottom Line: Tieks Are Not Worth the Money
Related Posts:

You’re probably wondering if I didn’t find a coupon code, how in the world I managed to score $25 off my first pair. No, they weren’t used and I didn’t buy them from eBay or Amazon. I purchased them directly from the website.

Every year, on Black Friday, the company does a special limited release of a color/style.

There’s a suspenseful build-up the week of Thanksgiving, where they give a sneak peek. 2018’s limited release was called Raspberry Truffle. The sneak peek looked like this. It just gave a hint of chocolate and raspberries, and eager customers guessed what the actual shoe would look like. Would it be more chocolate or more raspberry?

The marketing images revealed a beautiful, metallic raspberry color. I was already considering classic burgundy as my first pair.

Nearly everything in my closet is either light pink, burgundy, cream, or navy, and burgundy is a great, complementary color. If I’m spending $175 on shoes, I want a color that pops. I can buy black or nude shoes anywhere.

So on Black Friday, the sale didn’t start until 2 am CST. We set our alarms and had our computers ready to place the order. Remember, at this point, we hadn’t even seen what the shoes look like.

The marketing department at Tieks does an incredible job of building hype and creating that sense of urgency to order. This is called FOMO, or “fear of missing out”. At 2 am, the servers at Tieks headquarters crashed. They couldn’t keep up with the volume.

I sat up for 1.5 hours hitting refresh, adding to cart, and then seeing the dreaded error page. I finally was able to complete my purchase around 3:45 am and went straight to bed.

The next morning, I woke up to a shipping confirmation! Woohoo! My shoes are on the way! I should have them by Tuesday at 8 pm! By Saturday, women were already receiving their shoes and posting photos of them in one of the Facebook groups for followers of this glorious ballet flat.

They did not appear to be the same color as portrayed in the marketing images. They appeared to be more brown with a hint of raspberry in just the right lighting.

I immediately regretted spending the extra $20 (raspberry truffle were $195) on these Limited Release Tieks flats and thought, “If they’re not right for me, I’ll send them back and get the burgundy shoes.”

Fast forward to Tuesday. I still hadn’t received my shoes. Women in the Tieks Anonymous group were saying that they were receiving phone calls from Tieks and that they had miscalculated inventory and didn’t have enough shoes to ship out. I called Tieks and spoke with a very sweet customer service rep who assured me not to worry because my shoes were shipped Tuesday and the tracking information just hadn’t updated. Bless her heart. She was probably telling every single customer the same thing.

About an hour after speaking with her, I received a Facebook message from a Tieks customer asking me if I’d received my shoes. I explained that I hadn’t, and she said that she had them. Tieks had shipped my shoes to another customer…with my packing slip in it (with all of my personal information)!

I told you I’d provide you with an honest Tieks review.

This lady was super nice and offered to ship them to me if Tieks would provide an address label, but Tieks told her to ship back to them and they would ship me a new pair the next morning (since it was already past the shipping deadline for the day).

Keep in mind I wasn’t completely sold on the raspberry truffle. I told them that I’d like to receive some sort of discount or credit for the inconvenience, and they offered me a $25 gift card off a future purchase.

They said they’d put the code in the mail with my Tieks. As you can see below, the second rep I spoke with also mentioned that my shoes had NOT in fact been shipped out yet (as I was informed previously), so I would not receive a duplicate pair. 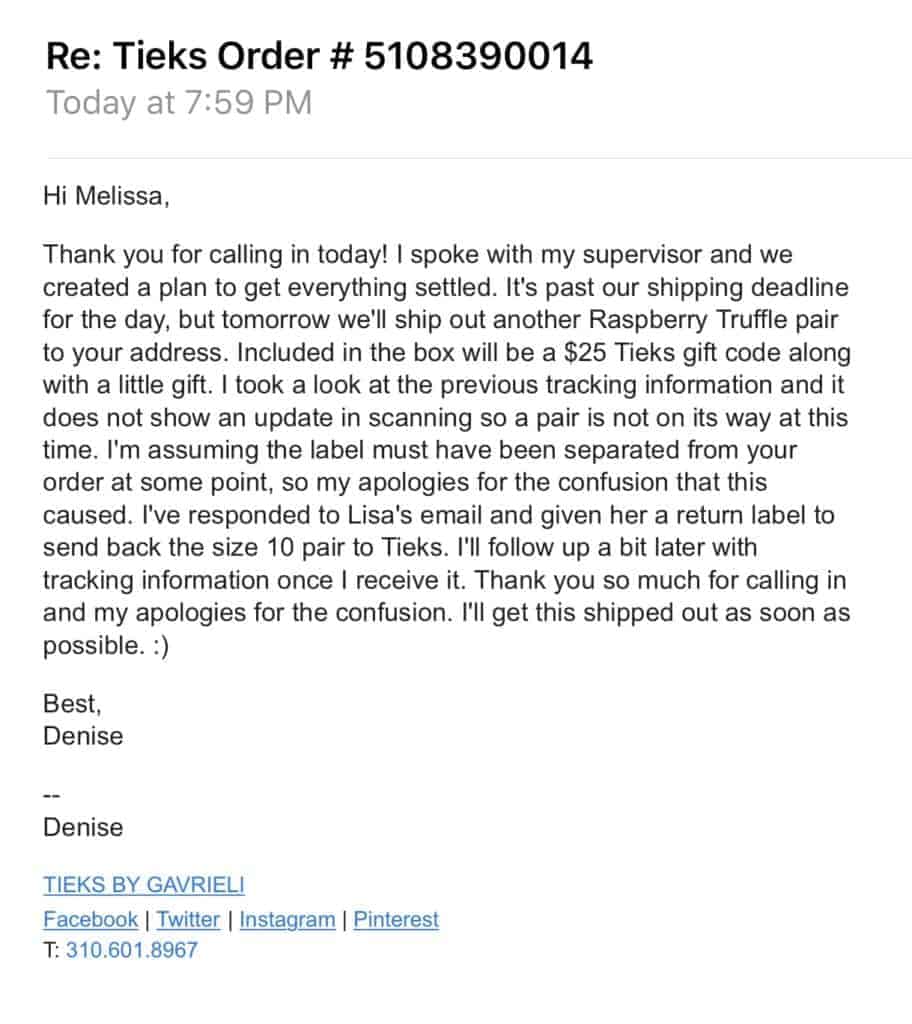 The next morning came and went and by noon I still wasn’t seeing tracking updates. So I called and spoke with the same representative.

Since my shoes hadn’t shipped, I canceled my raspberry truffle Tieks and ordered the burgundy and was able to use the $25 Tieks coupon code, bringing the total down to $150.

They even sent me some really cute little gifts along with the shoes! They really did make things right, I believe. So that’s how I saved $25 off my first pair. Now, for my honest review.

Why are Tieks So Expensive? Are They Worth It?

I’ve had my burgundy Tieks for a year now, and here’s the thing. I don’t love them. They were not comfortable straight out of the box. There’s a design flaw, in my opinion, and I don’t think they have always been like this because other women have said the shoe design/fit has changed over the past year.

The toe box is flat and tight. I placed this moleskin inside the shoe so that my big toe wouldn’t cut through the Italian leather. And after two weeks of wearing them, my toe feels like I’ve dropped something heavy on it. In every other area of my feet, they fit comfortably.

I sized up, as suggested, and purchased a size 10. There’s no way an 11 would fit any better. Here’s a photo of my shoes and you can see how tight they are over my toes.

Tieks Scuff Easily: How to Repair

Right away, the first week, I scuffed them. As a mom of three kids, I don’t tiptoe around life. In fact, I’m constantly rushing around to get from place to place. And I don’t want to have to worry about scuffing my super-expensive ballet flats.

I also happen to have a gravel driveway, but I tend to trip over my own two feet anyway.

Here is an updated photo of the Tieks. Since it’s just now getting warm out, I’m going to grab some of this repair polish to fix them, but I’m pretty dang disappointed. 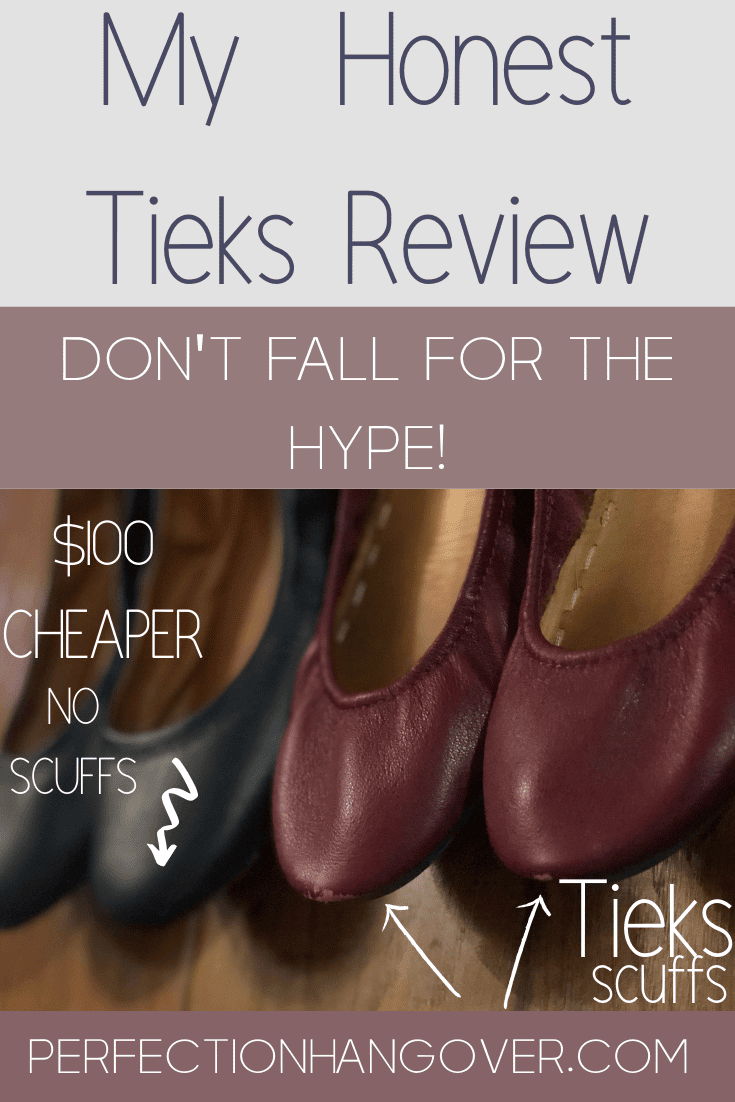 The company is so confident in their brand that they very rarely go on sale. As I mentioned before, the company has product launches in which they create the hype and FOMO, revealing a special edition pair with a limited supply.

It’s brilliant marketing, but don’t follow the herd like I did. My suggestion is to try some affordable alternatives before investing in Tieks.

You might find another brand that you love and can buy multiple pairs in varying colors to match your wardrobe.

Alternatives to Tieks Flats on Amazon

I’ve been lurking and watching for a Tieks flats coupon code for over a year, and I regret my purchase (even after receiving a $25 discount).

If I had to do it all over again, I would have tried bought these instead

Even if they were to only last one year, they’d be worth saving over $100. Plus, I wouldn’t have felt so bad for scuffing them almost immediately.

These Emmie flats are nearly the same color as the classic Tieks burgundy but cost more than $100 less. They offer several different colors, and I’m going to give them a try! I could actually buy 4 different colors of Emmie flats for the same price as one pair of Tieks.

Bottom Line: Tieks Are Not Worth the Money

If you’re looking for a Tieks coupon code online, you’re not going to find one. The only way to save money on Tieks is to be the direct result of a customer service mishap.

The good news is Tieks offers a great exchange program, so if you try some out and they aren’t a good fit, you can exchange them for a different size, and they pay the return shipping.

Also, the resale value of Tieks is also pretty shocking. You can find used Tieks selling for as much as $130 on Poshmark (with sweat stains and all)!

So many women plan to buy Tieks as their wedding shoes and dance into the night. Or they buy them because they read a blog post about someone who wore Tieks for 10 hours at Disney.

I wanted to love my Tieks so badly, but I just couldn’t recommend them to everyone. All feet are fearfully and wonderfully made (or something like that), and my feet are screaming!

What do you think of Tieks? Do you love them? Do you think they’re worth the money? Have you found a great Tieks alternative? Leave a comment and let us know! 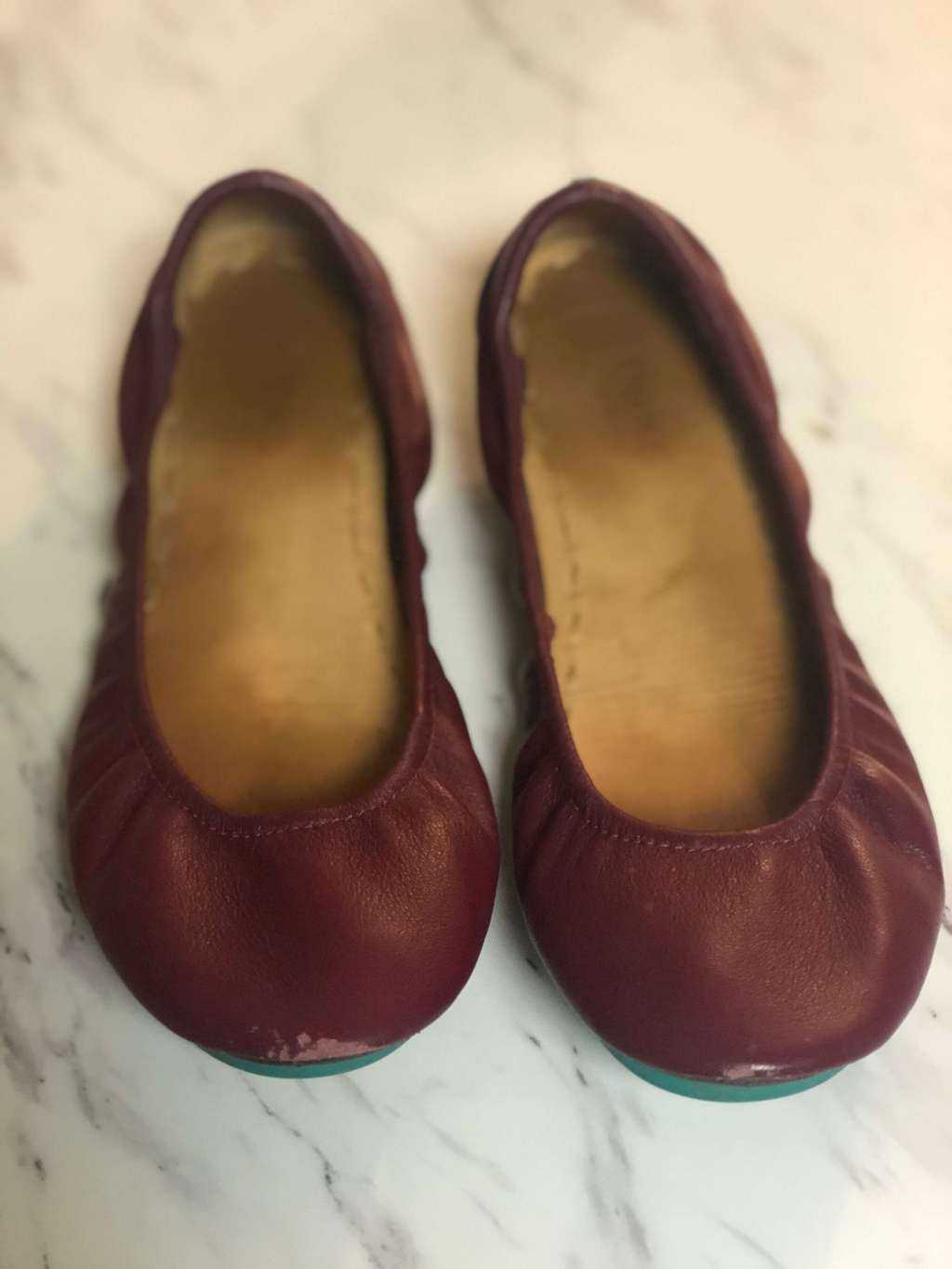 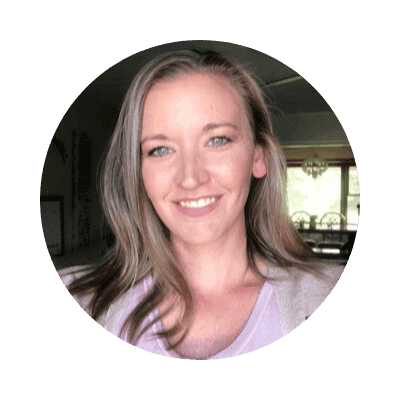 I launched Perfection Hangover to teach women how to control their spending and pursue their passions without feeling like it has to be "perfect".

>>START YOUR OWN BLOG

Can I Help You Find Something?