Did you know you can retire a millionaire by contributing just $35 per week?  When you’re in your early twenties, retirement seems so far away that it isn’t a priority. In fact, according to Bankrate, only one-third of millennials have started saving for retirement.

This is so disheartening because we are a brilliant generation of innovative thinkers, hard workers, and do-ers. When we see something we want, we go for it. I say ‘we’ because I am technically a millennial (just barely) at the age of 36.

Why Aren’t Millennials Saving for Retirement? 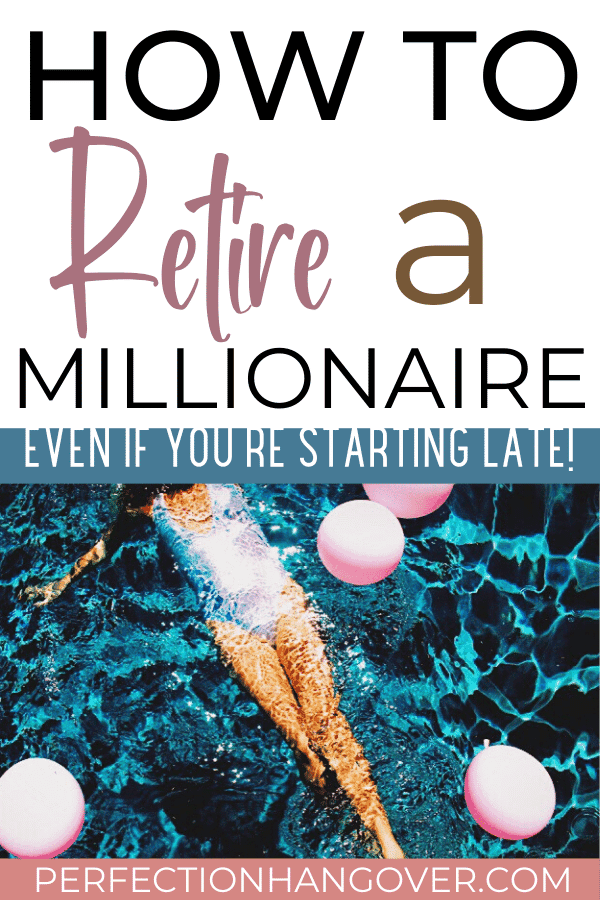 Answer: We prioritize our current needs and wants over future goals. aka “It’s my money and I need it now”.

The single reason my husband and I stopped contributing to retirement was that we listened to Dave Ramsey’s advice. We figured we’d pause retirement while we hustled hard to get out of debt.

The problem is, several years later, we were still in debt and had no retirement savings and nothing to show for our great income. Two people without so much as an associates’ degree were earning over six figures and were still living paycheck to paycheck.

The truth is, I can budget all day long. In fact, I am a numbers nerd. The problem isn’t lack of planning or budgeting. It’s a lack of self-control and wanting instant gratification.

We’d pay off thousands of dollars of debt only to charge the credit cards back up. Even worse, we had a car trading problem. We had a track record of trading cars in at least once a year or two. In our 9 years of marriage, we’ve owned 15 cars. FIFTEEN, y’all.

What the actual F were we thinking trading in vehicles that often?! I’ll just share with you some of my own (what Dave Ramsey calls) stupid tax.

When my husband and I were engaged in 2009, I drove a 2002 Chevrolet Trailblazer with 90k miles. He drove a brand new 2009 Honda Civic SI, six speed. He loved that car. And he didn’t owe anything on it. But…

His stepmom had recently passed, and as part of his inheritance, his Dad bought him this car in exchange for Aaron giving him his truck and continuing to make payments on it.

So we had a truck payment and my car payment, although I only owed about $3,000 on my car. He owed about $12,000 on his truck. Here was our first huge mistake that started an avalanche of debt and poor car buying choices.

Selling an Upside Down Car to Carmax

You’re probably wondering what cars have to do with learning how to become a millionaire. Stick with me.

First, we traded my Trailblazer for a $23,000 Chevy Tahoe. I wanted more space and I got it. I also was considered upside down on my car note because I owed more than what the dealership would pay for it. So, stupidly, I financed about $25,000.

Then, we thought we’d sell my husband’s car for cash outright. We weren’t patient enough to wait it out and sold it to Carmax for way less than it was worth. We paid off my father in law with the proceeds and bought my husband a beater. It was a 1999 Jeep Cherokee, and he loved it. But eventually, he wanted something nicer and so our quest for vehicles began.

We ended up selling an upside down car to Carmax years later again when we foolishly bought a brand new Honda Odyssey minivan and were stuck with a $733 per month car payment (for one vehicle).

How to Retire a Millionaire on $60,000 Annual Income

Selling my husband’s car to pay off his Dad wasn’t a bad financial decision…even though he was driving a beater for a while. However, here’s what our financial picture could have looked like if we’d have done things differently: 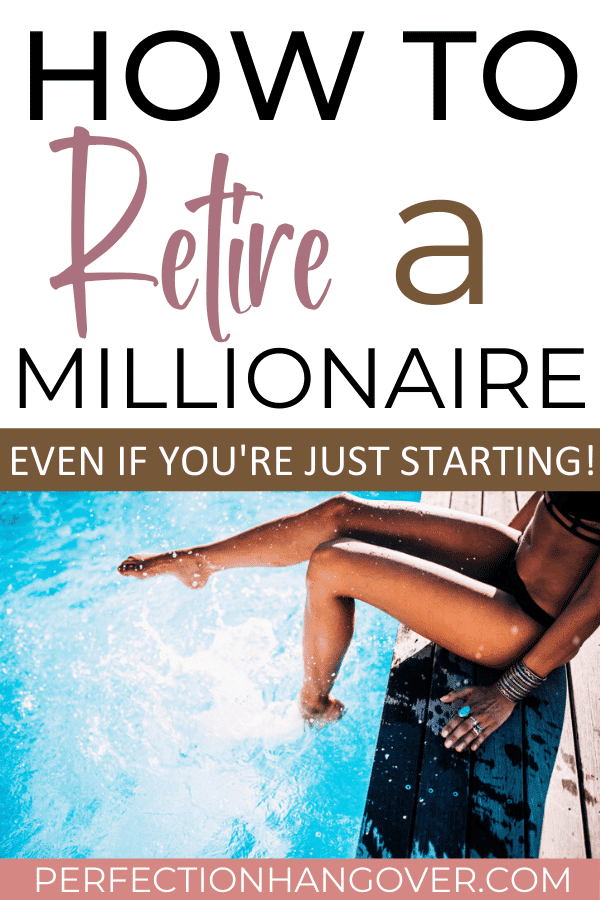 If we’d have kept my car and Aaron’s beater, we could have paid off my car in a matter of a few months. The rest of our debt, which really was quite small at the time but felt huge, could have been paid off by the end of the year. But because we chose to double our payments and total debt obligation, we were even deeper in the hole.

Let’s pretend that Aaron and I did, in fact, keep my car and his beater and as a result, we had $1,500 per month to save or invest after we paid off all of our other debts using the debt snowball method. At the time, we didn’t make much money.

We had a combined household income of about $60,000 before taxes. And our rent accounted for 25% of our gross income. Child care was also expensive as I had a five-year-old from my first marriage, and as soon as we got married, we had another on the way. 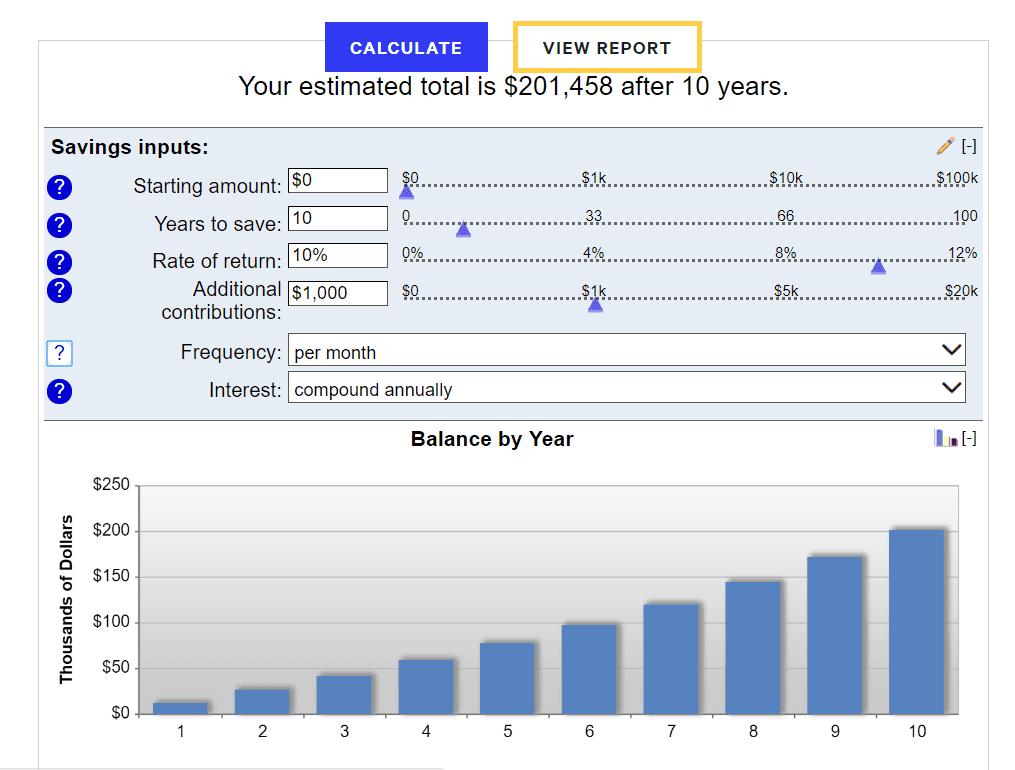 The above example is assuming we’re only putting our own money into the mix, and it’s based solely on compound interest, not increases in contributions based on raises. Most employers offer a company match to retirement contributions.

For example, my husband’s employer contributes 3% towards his 401k no matter what, and this money is vested immediately. Pretty cool, right?

To take things a step further, his employer will also match 100% of his contributions up to 5%. So basically, if my husband contributes 5% of his pretax income towards retirement, his employer contributes 8% and he’s now got 13% growing at an exponential rate.

Now, because I don’t want to share all of our business, I’m going to use the standard household income for this next calculation as an example. Let’s assume my husband’s gross income is $67,000 annually before taxes. Remember, if we’d have followed the scenario above, we would have $201,000 in retirement.

Now let’s assume he wants to continue contributing 20% of his gross income and his employer contributes 8% and his total contribution is 28% or $18,760 per year.

Assuming an inflation of 3% and raises of 2% annually, he would be on track to retire by age 67. 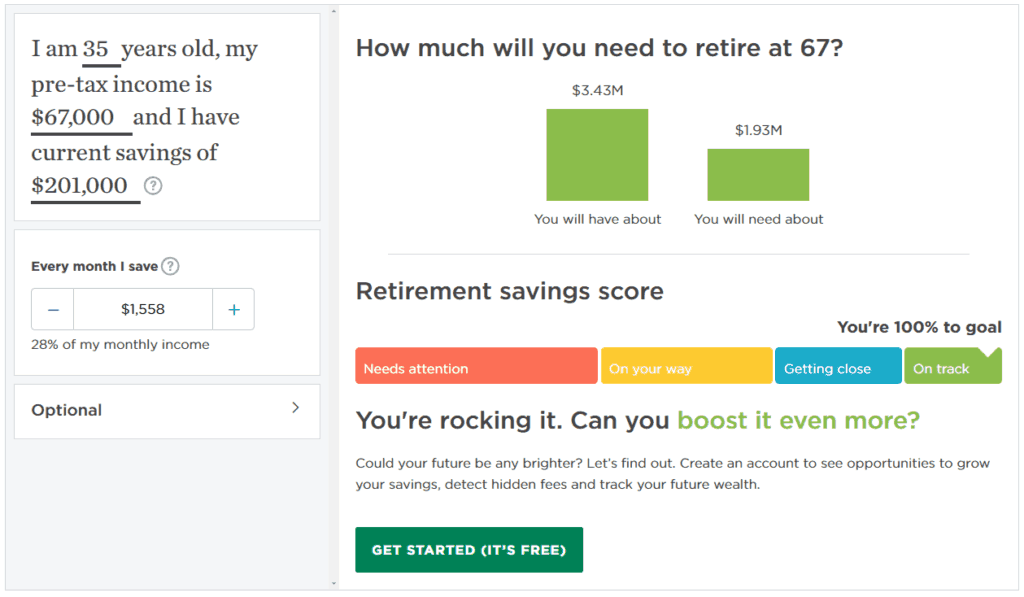 As you can see, if my husband and I had delayed gratification and driven our older cars for a while, we could have 3.43 million dollars in savings by the age of 67. In fact, he could retire at the age of 59 if he wanted to! I wonder if your parents are close to 59 in age? Are they retired? Do they have enough to retire comfortably now?

I share this story with you because financial mistakes can be quite humiliating. We’ve all been there…myself included. As long as you recognize where the problems are and what triggers them, you can make sustainable changes for a better future.

First of all, remember that your 401k contributions are taken pre-tax, meaning you don’t have to pay taxes on them. This means that while you might contribute 5% and that amounts to $100 per paycheck, you might only take home $80 less per paycheck because you’re saving money on taxes! You can calculate your take-home pay using different percentages as your 401k contributions here. I use the ADP paycheck calculator all.the.time.

Made popular by author David Bach, of The Automatic Millionaire

, the latte factor helps us become aware of the true cost of the small things we choose to consistently spend money on.

Side Note: If you haven’t read either of these books, I highly recommend you check out both of them. My absolute favorite is Start Late, Finish Rich

. You can get a free trial of my favorite audiobook here. I don’t recommend Audible too much because Scribd is much more affordable and you can listen to and read unlimited books.

He also has a book titled Smart Women Finish Rich

, although I haven’t read this one yet. I will, though! Just gotta find the time. 🙂

How to Calculate your Latte Factor

Grab a highlighter and print out your last 3 months of bank statements. Next highlight every time you ate out at a restaurant or grabbed snacks or coffee on the go. Count everything that wasn’t a meal made at home.

Now grab a different colored highlighter and mark everything that was a splurge, such as hair, nails, car washes/details, cleaning services.

To take it a step further, if you’re a smoker or drinker, use another color of highlighter and mark all of the times you bought cigarettes or alcohol. Don’t just include the times you went to the bar. Include how much you’ve spent at the grocery store on alcohol and/or smokes.

Now add each color up, separately and then add the total together. Was it a wake-up call? Are you blowing a bunch of money on your latte-factor?

Retire a Millionaire One Bite at a Time

Have you ever heard the saying ‘How do you eat an elephant? One bite at a time”? Small changes make a big impact in your financial outcome. If you can cut back on some unnecessary spending, get out of debt and stay out of debt, and start shoveling money away as fast as you can, you can retire with millions! What’s your latte factor? Share in the comments!