When you hear the term “living stingy”, how does it make you feel? Do you think that people who live stingy or frugal are simply broke and can’t afford to splurge?

Or do you think they’re just tightwads? There’s a slight difference between extreme frugal living and living stingy, and you can learn how to live stingy without sacrificing quality of life.

Contents hide
Why Would You Want to Embrace Living Stingy?
1. You’re living paycheck to paycheck (or worse, day to day).
2. You have massive amounts of debt with no light at the end of the tunnel.
3. You have specific goals to achieve FIRE so that you can quit your job and be self-sufficient.
Living Stingy vs Frugal Living
What Does Stingy Mean?
Characteristics of Stingy People
1. They Don’t Tithe
2. They’re Very Conservative With Investments
3. They’re Selfish.
Choosing Frugality over Living Stingy
How to Start a Living Stingy Lifestyle
Set Financial Family Goals
Participate in a No Spend Challenge
Create a Zero-Based Budget
Stick to the Plan
Donate Blood Plasma for Extra Money
Be Grateful Every Day
Make Positive Affirmations Part of Your Daily Routine
Declutter and Get Rid of Unwanted Stuff (ie Channel your Inner Marie Kondo)
Wear the Same Outfit for a Week
Do the Pantry Challenge
Pay Off All Consumer Debt
Start Tithing (if you aren’t already)
13. Read this article for more extreme frugal living ideas!
Share and Enjoy !
Related Posts:

Why Would You Want to Embrace Living Stingy?

There are a few reasons you might want to start living stingy:

1. You’re living paycheck to paycheck (or worse, day to day).

You’ve heard of living paycheck to paycheck, right? This is when you run out of money before your next paycheck and are struggling to make ends meet.

You might have to stop by the food pantry to get a monthly ration so the kids don’t go hungry. You might even call everyone you know to beg, borrow, and steal.

If you find yourself having to constantly negotiate with utility companies to avoid disconnection of services, you definitely fall into this category.

This would be the #1 reason to start living stingy.

2. You have massive amounts of debt with no light at the end of the tunnel.

Are you feeling the weight of huge amounts of debt? Here are a few common creditors:

If you find that you owe to many of the above, it might be time to start living stingy so that you can focus on paying off the debt fast!

A year or two of laser-focused intensity can completely change your financial situation!

If you need help figuring out a debt payoff plan, check out my post explaining the differences between the debt snowball vs debt avalanche.

Financial plans are not one-size-fits-all, and what works for one family may not work for you!

3. You have specific goals to achieve FIRE so that you can quit your job and be self-sufficient.

Before I became a financial blogger, I was in the financial services industry for about 15 years, specifically banking and real estate.

I had never heard of  FIRE, the acronym for Financial Independence Retire Early. The basis of this new term is that you work hard to retire as early as feasible.

I’ve never come across a regular Joe who doesn’t have a side hustle (like a blog or podcast or passive income through real estate) who has claimed he’s reached FIRE.

Everyone who talks about being financially independent and retired either has some sort of a blog or other business, which brings me to my next question:

Are they really considered retired?

I think most 30-40-year-olds who retire early want to share their stories online and end up starting a side hustle. It’s an inspiring story, really! There’s no reason they shouldn’t monetize it, but I digress.

You might want to live stingy if your goal is to save enough money to become financially independent and live off the land or travel the world in a sailboat.

I’ve written about extreme frugal living before. There are things one can do to practice frugality, and you can even stop buying certain things to save up to $15,000 per year.

You can sell all of your furniture in the house and sit on the floor in the living room, but these ideas all sacrifice quality of life in order to save money.

Living Stingy, on the other hand, is making a conscious effort to change everyday habits and behaviors.

A living example of stingy living is that Mr. and Mrs. Jones decide to have a “no spend challenge” month only spending money on the bare necessities and cutting out extras like Starbucks coffee, beauty services, and even alcohol or cigarettes.

By making a conscious effort to forgo spending, they’re saving money. The only thing left to do is to decide what to do with the saved money!

What Does Stingy Mean?

The definition of stingy is:

adjective: unwilling to give or spend; ungenerous.

When I think of this word, I always picture two different people…Scrooge McDuck and Ebenezer Scrooge from A Christmas Carol.

Both worked hard but were stingy with their money.

Did you know that Charles Dickens actually created the fictional character, Ebenezer Scrooge, after a real-life man named Elwes the Miser (7 April 1714 – 26 November 1789).

His father was a London brewer and died when Miser was four years old, leaving an inheritance of approximately 200 million dollars.

Even though his mother was filthy rich, she reportedly starved herself to death because she was “too mean to spend money on her well-being”.

What a terrible way to live!

Stingy people have a negative mindset and can’t bear to give away their hard-earned money! They refuse to tithe, and they turn up their noses to charity and the homeless.

People who are living stingy refuse to partake in risky investments. They prefer a slow, steady return, often investing in employer-offered 401k plans. They might have listened to an “expert” who advised to put all of their money in growth mutual funds “which have always earned an average of 12%”. )

Note: I am not recommending that. I think it’s incredibly irresponsible for anyone (especially unlicensed bloggers and financial experts) to offer blanket advice.

People who live stingy aren’t interested in investing in real estate with very little money. They’re terrified of the idea of thinking outside the box.

Stingy people want to live life on their terms, often spending money when and where they see fit. I know a man who lost his wife of 50+ years. A multi-millionaire, he found a much younger girlfriend and has been pissing away money thousands at a time.

Now, this may be grieving or that he doesn’t care to leave an inheritance to his family. But where he was living stingy his entire life, it appears he’s relapsed and is buying cars and taking trips and throwing it all out the window.

You could argue that frugal living and living stingy are one and the same. You just have to make a deliberate, intentional effort to make good financial decisions.

And you can have an amazing life as a result!

How to Start a Living Stingy Lifestyle

Here are a few ways you can start living stingy and being frugal in order to save money: 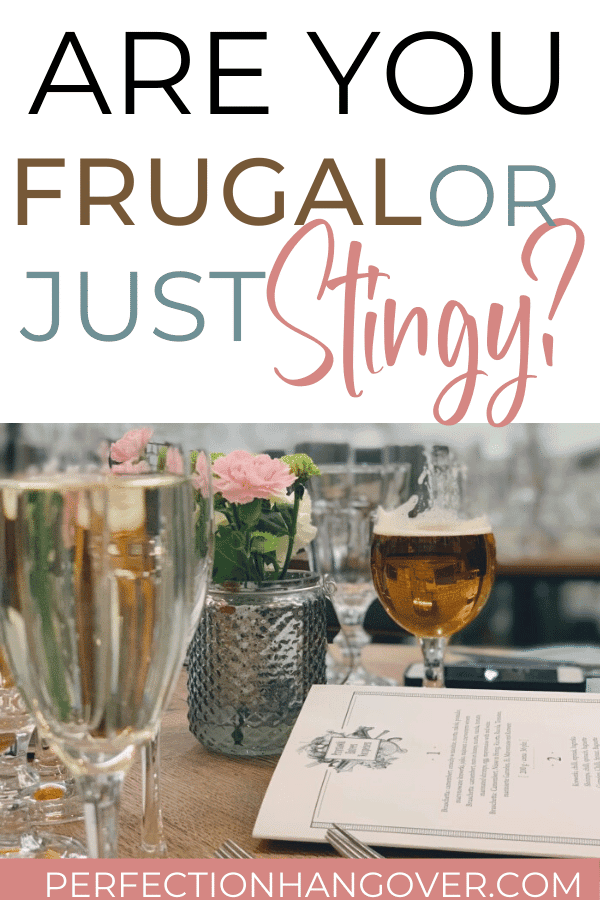